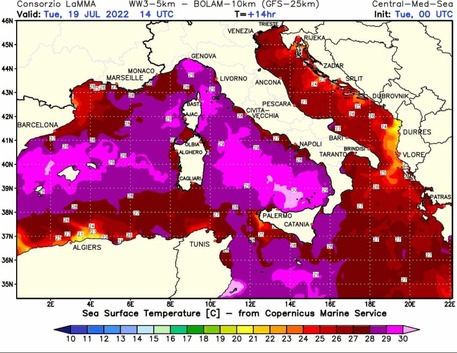 (ANSA) - ROME, AUG 9 - A series of exceptional marine heat waves killed off over 50 marine life forms in the Mediterranean between 2015 and 2019, according to a new, partly Italian study published Tuesday.
Most of the mass mortality events regarded corals, sponges, and macro-algae, but also fish, said the international survey compiled in part by the national research council (CNR)-IRBIM marine research institute and published in Global Change Biology.
The phenomena affected thousands of kilometres of coastline from the Alboran Sea to the Med's eastern coasts between the surface and 45 metres down, the report said.
"Sadly, the results show for the first time an acceleration in the ecological impacts associated with climate change, an unprecedented threat for the health and functioning of its ecosystems," said CNR-IRBIM researcher Ernesto Azzurro.
"What is most concerning is the interaction between warming and the presence of new pathogens in marine environments, with effects that are still largely unknown". (ANSA).