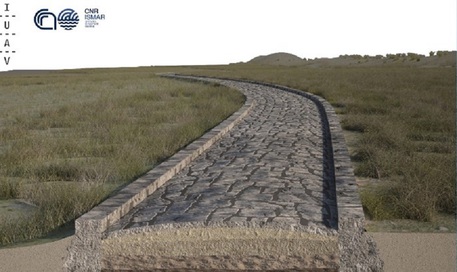 (ANSA) - ROME, JUL 22 - The remains of a Roman road have been found underneath Venice, according to a new Italian study.
The survey, carried out by researchers at the National Research Centre's Institute of Marine Science (ISMAR-CRN) and Venice's IUAV University, has been published in the journal Scientific Reports.
The discovery, which includes the remains of a Roman dock near the Treporti canal, shows there were human settlements in the area centuries before Venice was founded, as well as a road system between the present-day city of Chioggia and the ancient city of Altinus, the study says.
"We carried out the mapping with sonar because we wanted to study the morphology of the canals in 3-D," CNR geophysicist Fantina Madricardo told ANSA.
"Examining the data gathered, we noted the presence of 12 structures of an anthropic nature, aligned for over a kilometre in a northeast direction and at a depth of around four metres.
"After talking to the scuba divers who found similar remains in the 1980s, and speaking with archaeologist Maddalena Bassani," Madricardo continued, "we deduced that we were faced with lumps of basalt that paved the Roman road laid along the sandy coastline that is today under the sea". (ANSA).