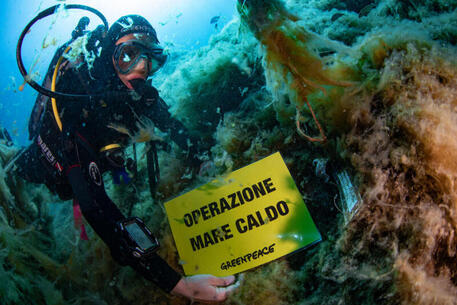 (ANSAmed) - ROME, 27 MAG - Italy's seas are feeling the effects of the climate crisis in a big way, with rising water temperatures causing drastic changes to marine biodiversity, according to a new report by Greenpeace.
The second edition of the Mare Caldo (Hot Sea) report, prepared with the University of Genoa's DiSTAV Earth, Environment and Life Sciences Department, said species that are sensitive to the special nature of Italy's seas are disappearing while species that are better suited to warmer waters, often alien ones, are proliferating.
Over 530,000 temperatures were taken at different depths and in different parts of Italy's protected marine areas as part of the Mare Caldo project.
Among other things, this research detected an abnormal sea water "heat wave" in June 2020 off the island of Elba and in the protected marine area of Portofino, with temperatures climbing by 1.5 degrees centigrade from their monthly average within days and staying at that level for a period of three weeks.
Gorgonia sea fans, coralline algae and sponges are among the Mediterranean species showing evident signs of necrosis due to the increases in temperature, the report said.
On the other hand, the presence of bearded fireworm (Hermodice carunculata) has increased considerably in Italy's southern protected marine areas, while some alien species are invading, such as the Lamprohaminoea ovalis, a gastropod mollusc of Polynesian origin that has been observed off Elba for the first time.
"The Mare Caldo project is showing how our seas are also suffering from the impact of climate change," said Alessandro Giannì, Greenpeace Italia's campaigns director.
"In order to address this crisis it is now more necessary than ever to, on the one hand, free ourselves of our reliance on fossil fuels and, on the other, to protect the more sensitive marine ecosystems.
"It has been seen that, where we protect biodiversity from the impact of destructive human activity, organisms are capable of recovering and adapting to a change which, unfortunately, is already taking place". (ANSAmed).