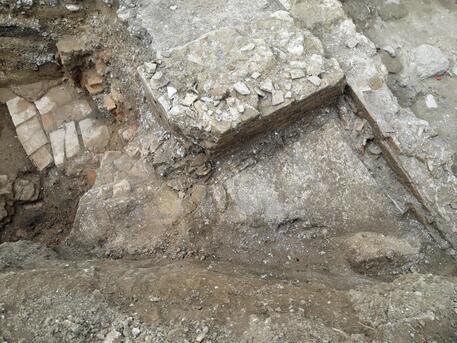 (ANSA) - ROME, APR 13 - A floor mosaic believed to be part of a villa once owned by sixth-century AD Ostrogothic 'emperor' Theodoric the great has been unearthed outside Verona, local sources said Wednesday.
Experts said the size and richness of the mosaic features indicated ownership by Theodoric (454-526) or one of his highest ministers.
The find was made during digging to replace gas pipes at Montorio outside Verona.
"Bits of mosaic, thermal facilities and residential complexes have been emerging in a scattered way at Montorio over the past decades and it is now time to systematize them," said Verona cultural heritage superintendent Vincenzo Tinè.
Theodoric (or Theoderic) the Great was king of the Ostrogoths (471-526), and ruler of the independent Ostrogothic Kingdom of Italy between 493 and 526, regent of the Visigoths (511-526), and a patrician of the East Roman Empire.
As ruler of the combined Gothic realms, Theodoric controlled an empire stretching from the Atlantic Ocean to the Adriatic Sea.
Though Theodoric himself only used the title 'king' (rex), some scholars characterize him as a Western Roman Emperor in all but name, since he ruled large parts of the former Western Roman Empire, had received the former Western imperial regalia from Constantinople in 497, and was referred to by the title "augustus" by some of his subjects. (ANSA).