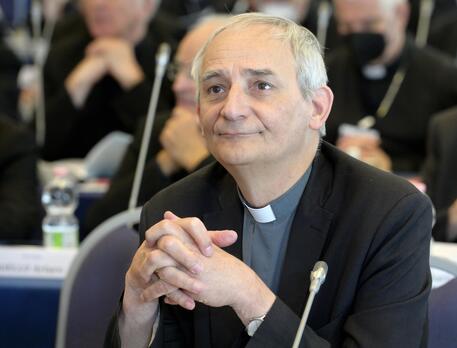 (ANSA) - ROME, MAY 27 - Italian Catholic Church paedophilia victims' group Italy Church Too said Friday they had already been rebuffed by the new head of the Italian Bishops Conference (CEI), Cardinal Matteo Zuppi, in their demand for an independent inquiry into predator priests along the lines of those that have taken place in other countries.
Their protest prompted an immediate response from Zuppi, who was only appointed by Pope Francis three days ago.
Zuppi said "our thoughts are always with the victims, their pain is our first concern." He said a wide-ranging report on abuse by the Italian Catholic Church since 2000 would be published on November 18, and would also include measures to prevent abuse recurring.
"We owe it to them, the Church is on the side of the victims", Zuppi said.
Asked why the report only overs the period from 2000 to 2021, and not abuse committed before that, Zuppi said "it seems much more serious to us, in some respects it hurts us a lot more because we are directly involved in that period.
"There is not intention to cover anything up, there is just the problem of seriousness. We have no interest in doing something that is just in-house, we want true clarity.
"We'll take the lumps we have to take, we will take on our responsibilities".
Cardinal Zuppi, 66, a former street priest working with the poor and homeless who has also helped broker international peace deals with the Sant'Egidio Community, is seen as a breath of fresh air for the CEI.
Despite this, Italy Church Too said "our letter asking for clear answers on the issue of abuse starting from the creation of an independent commission of inquiry has yet to get any response from the institutions".
It said "our battle goes on in a renewed form, things are getting bad even under the new presidency of Cardinal Zuppi who has made many steps forward but will not take any action on this (clerical abuse), evidently".
The CEI said Friday it had approved a five-part action plan against abuse including new listening centres and an analysis of cases since 2000 on data from the Congregation for the Doctrine of the Faith, the former Inquisition which now leads the anti-paedophile fight.
Italy has had no large-scale reckoning with clerical sex abuse like those in many other countries.
Italy Church Too say the abuse has also been massively under-reported in Italy.
Pope Francis described the sexual abuse of children as an "offence" against life on April 29 during an audience with the Pontifical Commission for the Protection of Minors.
"Abuse in any form is unacceptable," the pope said.
"The sexual abuse of children is particularly grave, as an offence against a life that is just beginning to flower.
"Instead of flourishing, one who is abused is deeply injured, at times permanently".
In February the Italian survivors of clerical sex abuse unveiled their campaign for Italy to see the kind of probes that have uncovered massive abuse and cover-ups around the world.
The umbrella group of survivors, called #ItalyChurchToo, launched the campaign "Beyond The Great Silence", saying that Italian priestly abuse is hugely under-reported and authorities have repeatedly ignored victims' pleas and covered up cases or shuttled perpetrators around.
"It's time for an Italian Spotlight', they said, referring to the landmark Boston Globe probe, the subject of the 2015 Oscar winning film, that exposed hundreds of predator priests as well as cover-ups by Church authorities.
The group described an offer from Italian bishops chief cardinal Gualtiero Bassetti, Zuppi's predecessor, as "unacceptable" in its lack of scope and accountability. (ANSA).