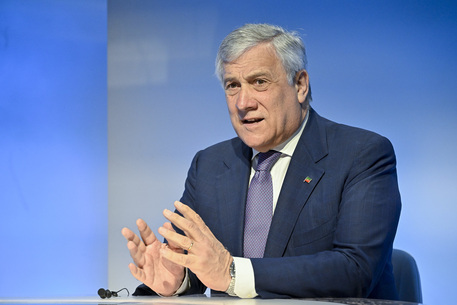 (ANSA) - ROME, MAY 27 - The centre right will not be able to win Italy's next general without Silvio Berlusconi's Forza Italia (FI), party coordinator told an ANSA Forum on Friday.
At the moment FI is third out of the three major centre-right parties in the opinion polls, with the support of around 8% of voters, behind Matteo Salvini's League with around 16% and the right-wing Brothers of Italy (FdI) group, which currently tops the polls with over 22%.
FdI, which is led by Giorgia Meloni, is the only major Italian political party not supporting Premier Mario Draghi's broad coalition government of national unity.
"Before we start thinking about who will be premier (of the next government), it is necessary to think about how to get the centre right to win the election," former European Parliament President Tajani said.
"You don't win without FI.
"No more space in the centre should be left free. This is a guarantee for the centre right and the whole country".
Tajani also defended the decision to support the Draghi executive, saying that if it were not on board, important measures, such as these week's agreement on the liberalization of Italian beach establishments, would not have been possible.
Draghi's government came to power after ex-premier Giuseppe Conte's second executive collapsed early in 2021.
"Berlusconi and FI made a clear decision at a time in which we were in the middle of a pandemic," Tajani said.
"We said let's put the interests of the country before those of our party.
"The voters understood, so much so that support for FI has grown steadily.
"The Italian people appreciated our action in government.
"We would have liked FdI to have participated too, precisely because they say they are patriots". (ANSA).