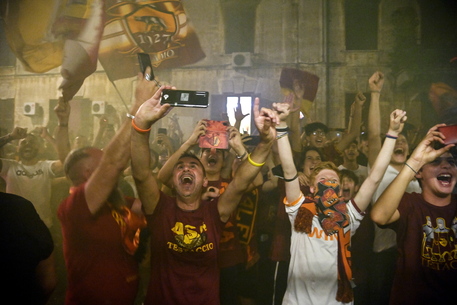 (ANSA) - ROME, MAY 26 - AS Roma brought back the Conference League trophy to Italy early on Thursday after beating Feyenoord in the final of the inaugural edition of the competition in Tirana thanks to Nicolo Zaniolo's first-half goal.
It is their first UEFA-recognised trophy and the second after they won the Fairs Cup in 1961, the precursor to the UEFA Cup and the Europa League.
The victory also ends a trophy drought that went back to Roma's win in the 2008 Italian Cup.
"I've realised the dream I had since I was a child," said Italy winger Zaniolo.
Coach Jose Mourinho was in tears after the game.
"It was necessary to make history today and we did," he said.
Around 50,000 fans watched the game together on big screens at Rome's Stadio Oilmpico.
There were celebrations long into the night in the capital with fans riding and driving around honking horns, singing, dancing and setting off flares. (ANSA).