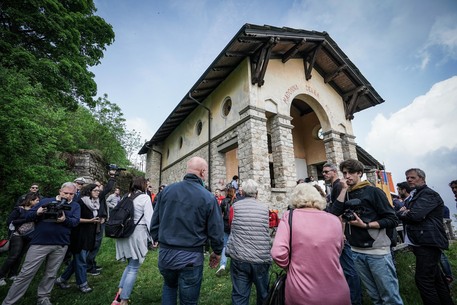 (ANSA) - ROME, MAY 26 - The cable in the Mottarone mountain cable-car disaster in Piedmont that killed 14 people a year ago was old and frayed and twisted due to human error, according to an intermediate report from the rail and maritime investigation agency Digifema out Thursday.
The report cited "gradual ageing due to corrosion, wear and tear and not adequately monitored twisting".
It also cited "inadequate staff training" and a lack of organization and maintenance at the facility.
On Monday, the first anniversary of the accident, one of the relatives of the victims at Mottarone said they feel abandoned.
"A year has passed and we haven't heard from anyone," said Teresa, the mother and grandmother of two of the victims, Elisabetta Personini and five-year-old Mattia Zorloni who died along with the boy's father, Vittorio Zorloni.
"They have abandoned us all".
Three people are under investigation in relation to the disaster - the owner of the company that ran the cable car, the company's director and the service's operational chief.
Prosecutors in the city of Verbania said the cable car's emergency braking system, which should have prevented the disaster after one of the cables snapped, was deactivated deliberately "for economic reasons in total disregard for the most basic safety rules".
The emergency braking system was allegedly deactivated to stop it kicking in and halting the service after a series of technical problems.
"Our aim has always been to give a response to the demand for justice," said Verbania Chief Prosecutor Olimpia Bossi.
"Today is the day of silence. It is the day of the families who came up here with great strength and courage to remember their lost loved ones".
The only survivor is Eitan Biran, a six-year-old Israeli boy who lost his parents, two-year-old brother and two great grandparents in the disaster.
The boy is at the centre of a bitter custody battle.
The Italian authorities put the boy into the care of his Italy-based aunt, Aya Biran, on his father's side of the family.
But the maternal side the family are challenging this decision.
The maternal grandfather, Shmuel Peleg, abducted the boy and took him with him to Israel last year, only for an Israeli court to order his return to Italy, which took place in December.
On Monday the maternal side of the family said via a spokesperson that they would continue to fight to be able to bring the boy up in Israel.
Italy is requesting the extradition of Shmuel Peleg and his male accomplice in taking Eitan out of the country, but Israel has a policy of not extraditing its own citizens. (ANSA).