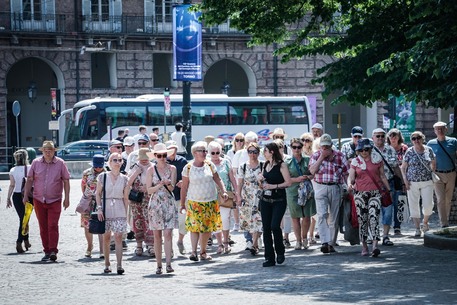 (ANSA) - BRUSSELS, MAY 25 - When the COVID-19 pandemic arrived in Europe at the start of 2020, States and local authorities took action to combat the spread of the virus and mitigate the effects of the social and economic crisis caused by the health emergency.
The pandemic's impact was largely dependent on the diverse local and socio-economic situations, according to the Geography of COVID-19 study by the ESPON European cooperation programme specialized in regional analysis.
Specifically, the research showed that a contraction of the economy was registered during the first wave of the pandemic in all of the areas analysed (Milan, Athens, Amsterdam, Barcelona, Elvas, Hannover, Helsinki, Iaşi, Malmö, Réunion, Mayotte, Veszprém, Corsica and the Azores).
The regions strongly reliant on tourism, such as Barcelona, Elvas, the Azores and Corsica, were hit hard.
The blow suffered by regions with more diversified economies, such as Malmö, Iasi and Veszprém, was softer.
The economic recovery also seems to have been more rapid in these areas compared to the tourist areas.
Lombardy, which suffered serious economic losses during the first wave because its contagion rates were among the highest in Europe and required rigorous restrictive measures, is a special case.
Some sectors bucked the trend and registered increases in revenue during the pandemic.
In Milan, for example, the pharmaceutical and food sectors grew, while in Iasi the ICT and building sectors registered growth.
Unemployment also rose in all of the areas studied, but the job losses were more pronounced in some regions, such as Lombardy, than others, such as Iasi and Elvas.
The reduction in employment levels was particularly pronounced in tourism, but also in the services, culture and retail sectors.
The young and people employed on temporary contracts were the most exposed to the risk of losing their jobs.
In late 2021 the labour market had still not completely recovered in several of the areas studied, such as the Azores and Barcelona. while it had almost returned to pre-pandemic levels in Elvas, Amsterdam and Veszprém.
In the last two cases, the main labour-market challenge is no longer unemployment, but the shortage of workers.
In Malmö, on the other hand, there is a growing gap within the labour market.
On the one hand, the temporary unemployed re-entered the world of work relative soon after losing their jobs, especially if they were qualified, while, on the other, the long-term unemployed were still facing major hurdles to return to it.
(ANSA).