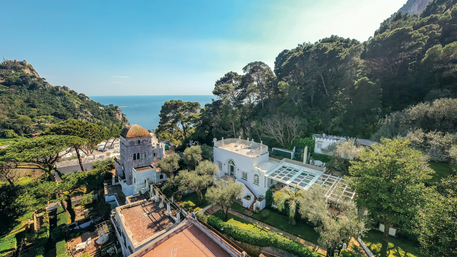 (ANSA) - ROME, APR 28 - The Capri villa that Italian actor Christian De Sica and his wife Silvia Verdone have owned since 1996 is now on sale exclusively via Florence's Lionard Luxury Real Estate agency.
The property is part of the 'I Quattro Venti' (The Four Winds) residence, one of the historic homes that contributed to giving the 'blue island' its fabled status: designed and built on the slopes of Monte Solaro between 1900 and 1903 by American symbolist painter Elihu Vedder, it was subsequently sold to another American artist, Earl Henry Brewster, who hosted there English writer D.H.Lawrence, the author of Lady Chatterley's Lover, among others.
'I Quattro Venti' changed ownership again at the end of the 1930s and other artists spent time there, including Joseph Beuys, who dedicated one of his most famous works to Capri, and Cy Twombly.
The villa of Christian De Sica and Silvia Verdone was created, in the Capri style, from what was Vedder's studio in a position that offers a view of Capri and, at the same time, of the Bay of Naples and the Gulf of Salerno. It has a total of 250 square metres of interior space, split between two floors, and it is surrounded by a garden with citrus fruit and olive trees.
An outbuilding used as a spa area that has one of the property's panoramic terrace views on its roof is close but separate from the villa.
"It is a particularly favourable time for the luxury property market in Italy," said Lionard Luxury Real Estate CEO Dimitri Corti.
"Villas by the sea continue to be among the most in-demand, sought-after assets, especially in exclusive locations such as Capri". (ANSA).